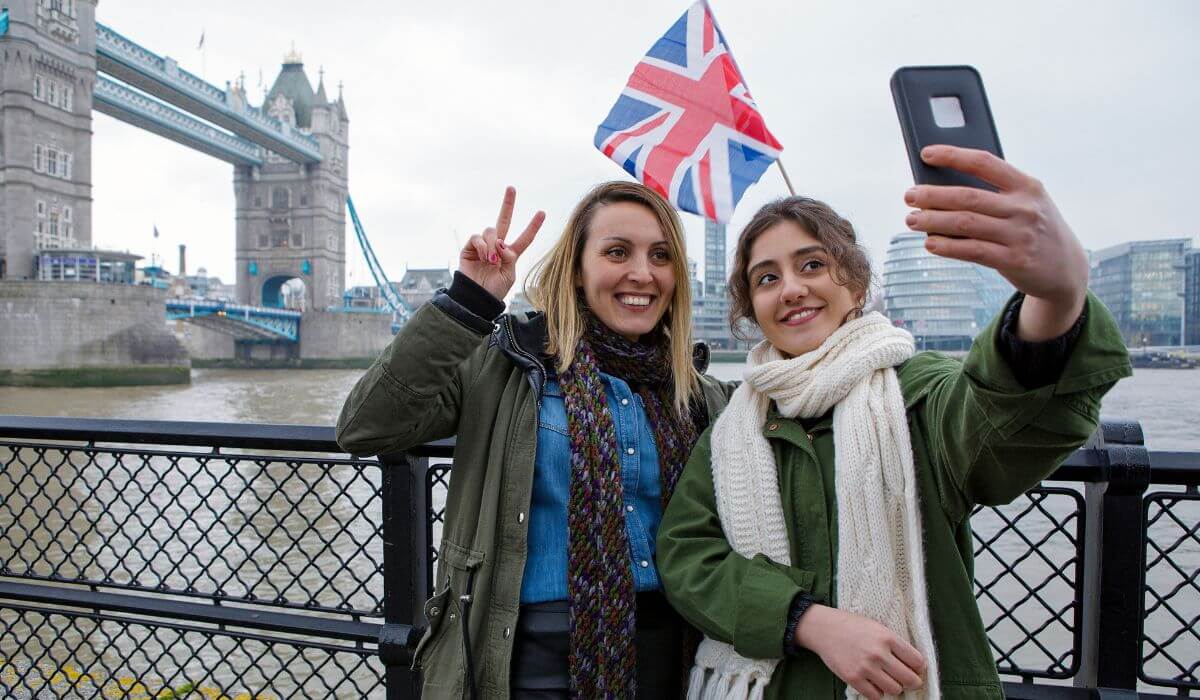 Thinking of visiting London in December?

Then you’ll need to plan things to do and also understand how to dress to cope with London weather in December!

You have come to the right place for sure. We’ve got the only guide you need for your trip.

In this article, our team takes a look at the weather, clothing, seasonal things to do, where to eat, and much more.

Best Time To Visit London In December (From Experience)

We love London in winter, and have visited a lot. The city is vibrant and changes its atmosphere as Christmas approaches.

If you are considering visiting London England in December you need to make a call about the timing. Perhaps you want to come earlier in the month, when the tourist footfall is SO MUCH lighter – allowing you to explore at your leisure.

Or, perhaps you are asking should I visit London in December at Christmas – then you can expect beautiful lights, a jolly atmosphere, and even ice skating.

But who cares. No matter what time of the month you visit in, London UK in December has an amazing range of attractions on offer for a wide range of tastes.

What to Expect from London Weather in December / What’s the weather in London in December?

Let’s dive a bit deeper into the weather.

We already discussed the basics of London temperature in December at the beginning and towards the end of the month.

Overall, the average temperature in London in December is about 9 degrees Celsius.

What’s the Weather in December in London in Terms of Rainfall?

But there is more to the weather in the UK than the London in December temperature ranges! Any of you familiar with this lovely island, in general, will know that rainfall plays a big role in British life!

So, when talking about the climate in London in December you will need to bear in mind that it will likely rain on you at some point! It is also not unknown to snow – but it is rare, maybe it will happen.

Daylight Hours In London In December

December is a pretty dark month – don’t expect much daylight, and even during the day you may find complete cloud cover.

Don’t come to London in December expecting to get a tonne of vitamin D!

So what time does it get dark in London in December then? And sunrise?

Here are the facts:

What To Wear In London In December

The trick to what to wear in London in December is to be prepared!

You need to be prepared for literally ANY eventuality in London. It can rain. The sun can come out. It can get hot indoors. It can snow, freeze or hail.

So, you need to pack a wardrobe that will allow you to deal with these eventualities.

Below is our recommendation.

What to Pack For London In December

5 Things To Do In London In December (Tickets Needed)

Wondering what to do in London in December?

There is just so much!

Aside from the standard great London lineup of museums, shows, and restaurants, there are dozens of seasonal activities perfectly suited to the winter season!

Let’s check out a mixture of the best things to do in London in December!

A cold or wet day? Kids bored? Then you need to consider a visit to the Harry Potter Studio at Warner Brothers.

Consistently ranking as one of London’s top activities for kids it’s pretty much a given that no one will be bored. Get tickets here – it’s no wonder it makes our list for best things to do in London in December!

It is hard to get a true feeling for London’s skyline from the ground up close to the buildings.

A Thames river cruise offers you the chance to kick back, relax and enjoy the scenery. In the winter you have an added advantage – a roof over your head or a shelter from the wind. Book tickets for under €20 here.

3. Tower of London and The Crown Jewels

You can’t visit London without experiencing a little of the city’s history.

The Tower of London offers that – amidst a stunning city backdrop. Tickets cost just under €35 and allow you to explore the delights of the UNESCO world heritage site.

Consistently on most visitor’s lists of things to do, the London Eye experience is certainly worth it.

In a pod, you’ll be protected from any rain, and you should be able to see enough unless visibility is really poor that day. If you don’t have a city pass that includes a visit to the London Eye you can get tickets here starting from €40.

Don’t visit London without checking out Buckingham Palace! A tour of the staterooms with an experienced guide costs around €35 and tickets are available online here.

5 FREE Things To Do In London In December

Short on cash? Don’t worry – there is plenty on offer in London for all budgets!

Here are some great ideas for free things to do in London.

One of the great free events in London December has to offer is a light display at Wembley Park.

Including over 100,000 twinkly lights and a whole bag of other attractions including a Christmas Tree, it’s a great place to head if you have a free evening.

The great thing about December in London is that the Christmas Lights are switched on in November already.

So it doesn’t really matter what time of the month you visit. Head to the area around Regent and Oxford Street for the best decorations.

What better way to get in the festive spirit than a Christmas Market!

We can’t promise this is completely free thought -you may get tempted by gingerbread or a mulled wine! Trafalgar Square and the Southbank Center are 2 areas of London that usually put on markets.

It is a fab place to head if the weather is poor, and you can easily spend quite a few hours taking in the sites. The best thing? It’s FREE!

A nice way to get yourself in the Christmas mood, this beautiful old cathedral is free to enter and well worth a look.

Fun Things To Do In London In December With KIDS

Don’t forget the kids when you are deciding what December events in London to attend. London with kids in December can be so much fun!

Hyde Park London in December is an absolute must do with little kids in December.

Tip – With entry starting from as little as £5 (and refunded once you spend £25 on rides) it is the perfect place for a winter’s day or night’s enjoyment for all the family.

One of the best shows in London December has to offer – Shrek’s Adventure offers tickets to live show and the magic bus starting from just £27.

Romantic Things To Do In London In December

London can be as romantic as Paris if you play your cards right.

Here are a couple of romantic things to do in London with your better half!

Holding hands and nursing each other’s bruises – what’s not to love. Ice Skating in London is a thing in December. Try Hampton Court Palace Ice Rink, or the one down by Canary Wharf to name a few.

Couples Pod at the London Eye

It’s Pricey but worth it to impress a special someone. The couples pod on the London Eye is known as Cupids Pod and costs around £600, including a 30 minute rotation and a bottle of bubbly!

How To Find Cheap Flights To London In December

It is pricey to fly nowadays that’s for sure! To be sure of the best possible deal, use a price comparison website such as skyscanner to search for flights at least 3 months in advance.

Tip – We suggest trying all options – such as hitting the “nearby airports” button and trying a few combos. For example, coming into Stansted and out of Southend may result in a cheaper fare.

Since many commute to London for business it is also best to stay away from Sunday night or Monday morning fights, same with Friday afternoons.

Shopping In London In December

It is a lot of people’s dream to go on a shopping spree in London.

And Christmas can be simply magical as you shop for gifts for your friends and family. It’s even better with Christmas Lights in the background. Better still the December sales in London are brilliant!

Wondering when do sales start in London in December? They are usually known as the “boxing day sales” and begin on the 26th December, lasting into January.

If you want a break from the big smoke head to Wakehurst in Sussex (you can take the train from London Bridge to Haywards Heath) for a fabulous light display complete with beautiful lanterns. Location – Ardingly, West Sussex.

Take the train from London Bridge to Oxford and stroll around the ancient meadows. Then, stop off at The Perch – a thatched cottage pub for a warming meal.

December Nightlife In London – What To Expect?

London nightlife is amazing all year round. If you are lucky enough to spend New Years Eve in London then you have a wide range of activities to consider.

There are plenty of festive and themed nightclub events to attend as well. Design My Night publishes winter nightlife events already so you can begin your plans now!

How Many Days In London In December?

You can easily spend a whole week soaking up a whole range of things to do, including musicals in London in December in the theater district or visiting the opera.

Most people however don’t have the luxury or the budget to spend a whole week here. Here are a couple of bite size London in December itinerary picks for shorter durations.

2 Days In London In December

Short and sweet – 2 days in which to see London is a tall order! Here are some absolute must-see highlights for a 48 hour stay in London.

Bolt on this extra day for a 3 day trip!

Bolt on this great day 4 itinerary.

Today , it’s time to get Christmassy.

A day to pick a few attractions to round off a fabulous week.

Affordable Places To Eat In London In December

London can break a bank account! Here are some affordable places to eat when in the city so you can save your money for attractions.

Best Places To Stay In London In December (Top Hotels)

Does it snow in London in December?

It is not unheard of to snow in London in December, but it is rare - perhaps falling on a couple of days a month and unlikely to be significant.

Is it good to visit London in December?

How cold is London in December?

What time are sunrise and sunset in London in December?

Sunrise can be as late as 8 pm, whilst sunset is usually around 4 pm.

Does it rain in London in December?

Yes - expect rain to fall around 10+ days a month.

Does Eurostar run from London to Amsterdam in December?

Yes - although not on Christmas Day. Check timetables in advance for routes and planned works.

Can you tour Buckingham Palace in December?

Of course! The staterooms are open throughout September - although check for holiday closings.

December in London is waiting for you! Now, plan the rest of your trip by looking at things like London City Passes, Travel Cards and other things to do in the big smoke.